My Orchid Is Sick, Can You Help? 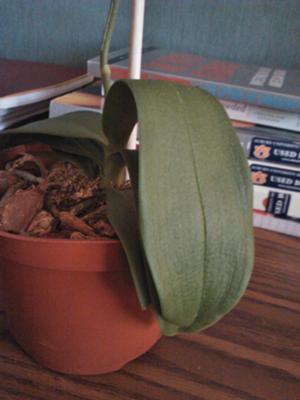 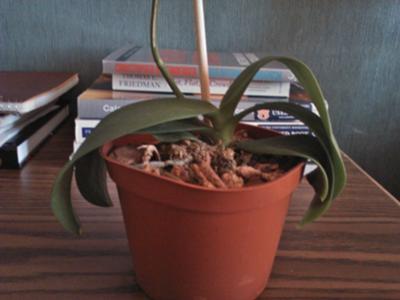 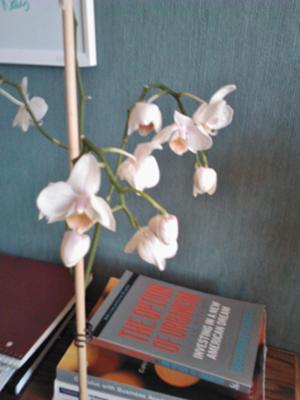 I've had my Orchid for about 6 months now. When I first got it, it had several shoots off the main stem and a pretty good amount of buds. Over the next 5 months, it continued to bloom and maintain a very healthy appearance (it had up to 30 blooms at once). I kept it on my south-facing windowsill where it got a pretty good amount of sunlight but not directly.

I also watered it about once every 2 weeks (mostly just when it felt dry) and I pruned it by removing the dead blooms. I took it home with me over Christmas break and discovered mold covering the top layer of moss. At this point, the leaves were still firm and green and only a few of the buds had begun to die. While home, I took it to a local plant nursery to see what they could tell me about it.

Apparently the people I bought the Orchid from had potted it entirely in moss. It had been holding too much water and the roots had started to rot. The people I took it to kindly repotted it for me, removing most of the moss and replacing it with Orchid bark. I was immensly relieved as they told me that overwatering was my problem and that as long as I only watered it a little every 2 weeks, it should not take long for my Orchid to recover.

I have followed their instructions, but unfortunately my Orchid has continued to deteriorate. The leaves are now limp and fading, still green but lightening. They are also starting to shrivel a little bit. The blooms, although still alive, are starting to droop and I haven't had a bud bloom for over a month now. I'm at a loss for what to do. I've been researching Orchids for the past week or so to try and figure out what to do to help it but I haven't found much. One article did say that Orchids get tired after having bloomed for so long and should be trimmed back after a certain amount of time. Should I trim my Orchid? And if so, how much? Also, I just discovered that the pot it's in has holes in the bottom (I had it sitting in another pot so I couldn't tell). Since I only water it once every 2 weeks, could it be possible that all the water is draining out and it's not getting enough (the pot I had my Orchid pot in had standing water in the bottom)?

Thank you so much for your help. My Orchid was a gift from my brother and it means a lot to me.

I'll try whatever possible to keep it from dying.